The Greatest Scam in Medical History

There’s a huge myth in our culture that cholesterol causes heart disease. Not true. But many medical professionals still believe it. In order to defend this myth, many of us have been sold a lot of misinformation and dangerous prescription drugs, creating a disaster for our nation’s health. But it doesn’t have to be this way. 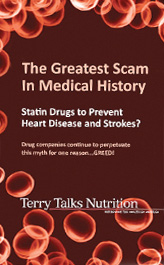 The Greatest Scam in Medical History

Statin Drugs to Prevent Heart Disease and Strokes? Drug companies continue to perpetuate this myth for one reason. Greed! The annual revenue for two statin drugs is 34 billion dollars. The makers of these two drugs provide false, scientific evidence, lies, and misleading propaganda to keep these drugs on the market.